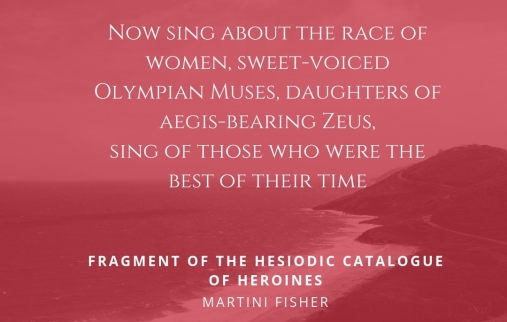 “Hero has no feminine gender in the age of heroes.”

At the start of the destructive, long-running war between Athens and Sparta in 430 BC, Pericles, a prominent and influential orator and general of Athens, made a moving speech of ancient valour in honour of those who died in the war.

“… for the Athens that I have celebrated is only what the heroism of these and their like have made her … none of these men allowed either wealth with its prospect of future enjoyment to unnerve his spirit, or poverty with its hope of a day of freedom and riches to tempt him to shrink from danger. No, holding that vengeance upon their enemies was more to be desired than any personal blessings, and reckoning this to be the most glorious of hazards, they joyfully determined to accept the risk… Thus, choosing to die resisting, rather than to live submitting, they fled only from dishonour…”

After speaking at length on this rather splendid theme, Pericles finally remembered to mention the women of Athens who had just lost their husbands, lovers and fathers of their children.

“The greatest glory of a woman is to be least talked about by men, whether they are praising you or criticising you.”

And yet, there was more to classical womanhood than Pericles’s silent matrons. Aspasia, for example, Pericles’ own long-term girlfriend was famously clever and sophisticated. She was certainly talked about and said to have influenced him a great deal. Still, although it was concluded for a long time that there is no female counterpart to the hero, archaeological evidence shows that heroines are included in some of the earliest manifestations of hero cult. The shrines of Pelops and Hippodameia at Olympia may be of great antiquity, early hero-reliefs show hero and heroine pairs, and a dedication to Helen is perhaps the earliest known Laconian inscription, dating from the second quarter of the seventh century.

The classical world has given us many strong women such as Antigone, the heroine of Sophocles’s play of the same name, who only wanted to give her brother, Polydeuces, a proper burial despite her uncle king Creon’s orders. Her sister Ismene struggled to persuade her to obey the king’s edict. “We’re girls,” she cried. “Girls cannot force their way against men.” Antigone would not listen to her and proceeded to commit a crime punishable by death, defying the explicit command of her uncle and gave her dead brother, who died a traitor, his proper funeral rites.

Odysseus has received a lot of attention for his journey. However, he was protected by a woman. The goddess of wisdom, Athena, played the role of Odysseus’s protector and was always on hand to provide magical disguises or advice. Draupadi, from Indian Mythology, was an astute strategist who never failed to take revenge against her enemies. Anath, the ancient Canaanite goddess of love and war, was also someone you want on your side as she was famed for her ferocity in battle. An ancient Ugaritic text describes Anat’s revenge against a man who slighted her in no uncertain terms:

with a sickle she cut him,

with a winnow she winnows him,

with fire she scorches him, with a mill she crushes him,

she scatters his flesh in the field to be eaten by birds.

In Virgil’s Aeneid, Dido, the queen of Carthage, was doing very well for herself and founded a new city in what is now Tunisia before Aeneas, an exile from defeated Troy, turned up. He was an unemployed loser, but he was pretty. The pair fell in love before Aeneas left for Italy and committed one of the most brutal dumpings in literature which led Dido to commit suicide by stabbing herself with his sword. Dido’s handling of her breakup is admittedly rather weak compared to others. In Buddhist mythology, the beautiful, rich and resourceful Kundalakesa of Therigatha saved a young thief from execution one day and then married him, because she thought she loved him. As the thief then tried to kill her and steal all her jewels, Kundalakesa pushed him off a hill and casually moved on with her life. Hidimbi from Indian Mythology is the modern day version of a single mother who raises a son with all the right values and qualities, with no help from anyone. Hidimbi was a rakshasi (demon) who fell in love and married Bhima, one of the famed Pandava brothers. They lived together only for a very short time, enough for Hidimbi to get pregnant, before Bhima left. Hidimbi later gave birth to Ghatotkacha, Bhima’s son, and raised him alone.

These are all important accomplishments. However, according to Pericles and Finley, these ladies were no heroes. Medea is referred to as a goddess in a forgotten Mycenaean slate. She was worshiped in Corinth until the Historic Ages. Ancient craters depict her as a priestess in Eleusis. The Greeks of South Italy honored her with hymns. Even Apollonius of Rhodes praised her as a “treasure” that saved the Argonauts, equal to Jason. But she is forever known as the sorceress who killed her children.

To understand how or why these female accomplishments were dismissed, it is useful for us to understand the ancient concept of heroism. Some historians came to the obvious conclusion that heroines don’t often go on quests or engage in combat with monsters or gods. But there is a lot more to heroism than punching monsters. There’s independence, fortitude, humility and sacrifice. The female heroic figure is often free from male assistance in her quest to achieve status. Despite the various under-telling of heroines, the majority of them are independent. It is usually female characters who help male heroes. Ariadne helped Theseus slay the Minotaur, Medea helped Jason in his quest for the Golden Fleece, and Nausicaa was the advisor of Odysseus. While male heroes require female assistance at times, female heroes do not require male assistance, making them independent from their counterparts and highlighting the concept of female heroism in ancient literature.

Euripides’ play Erechtheus is about Erechtheus and Eumolpos who found themselves continuing the rivalries of their divine patrons Athena and Poseidon. After consulting the oracle at Delphi to learn how he might protect Athens from the impending siege, Erechtheus was told that he must sacrifice one of his daughters to save the city. Erechtheus shared the news with his wife, Praxithea, who says:

“If there were a harvest of sons in our house rather than daughters and a hostile flame were engulfing the city, would I not have sent my sons into battle, fearing for their death? … I hate women who in preference to the common good choose for their own children to live.”

From modern eyes, this may not make much sense. Sacrifice seems to just mean certain death for women while when men go off to war there is always a small chance of them coming home. However, women were often the last line of defense in times of war. An example of this happened in 1467, in the warring states period of Japan. It was a desperate time where everyone was swept up into war and almost all healthy men were drafted into armies or slaughtered in battle. This period gave accounts of bands of women led by the wives of warlords dressed in armors. Appalled by the mass suicide of the surviving women and children in her husband’s besieged castle, the wife of Mimura Kotoku armed herself and led eighty-three soldiers against the enemy. She challenged a mounted general Ura Hyobu, who edged backwards muttering, “She is a demon!”. Heroines, therefore, had to defeat the enemies who were evidently strong enough to kill their husbands and many other strong men – it is no surprise then that, as Rudyard Kipling says, “the female of the species is more deadly than the male” and that the heroines had to be more skilled than their male counterparts for not even half of the glory he would have received had he managed to survive. This endures to a common lament modern women are familiar with today by Charlotte Whitton, “Whatever women do, they must do twice as well as men to be thought half as good.” Odysseus’ last line of defense was his wife, Penelope. If Penelope had married one of her suitors, that man would have had claim over her (Odysseus’ wife), Telemachus (Odysseus’ son) as well as Odysseus’ house and fortune. A simple “yes” from Penelope would have costed Odysseus everything. – the point is that, in desperate times, good men and women will always step up and do their parts according to their abilities. If it wasn’t for the ancient Greeks’ silly insistence for women to be docile and less educated, Iphigeneia might have picked up a spear.

The practice of burning or burying women alive with their deceased husbands was first mentioned in 510 CE, when a stele commemorating such an incident was erected at Eran, an ancient city in the modern state of Madhya Pradesh, India. There are also accounts of widow sacrifice among Scandinavians, Slavs, Greeks, Egyptians and Chinese. This practice usually began among warriors or warrior clans because, as the warriors’ duty was to protect the bodies and honor of their people on the war field, their wives’ duty was to protect their family’s body and honor at home. Therefore, the death of a husband, even while he was away at war, would be seen as the wife’s responsibility. She was the one person entrusted to protect her warrior husband from harm and dishonor – as futile as this may be. The death of her husband would have been seen as her fault.

The advantage of female heroism in ancient literature is that it really takes an extreme situation for these ladies to die and it is mostly due to the fact that the men failed at their own heroic attempts. Agamemnon was a powerful king and warlord who should be fully capable of defending his own city, but it was his daughter Iphigeneia who had to die to enable the Greek fleet to set sail from Aulis to Troy. The reason all those Japanese women had to step up and fight was because their men were somewhere else or otherwise overwhelmed by the enemy and it was up to them to defend their family. Not making a big fuss, these women were there when they were needed and, if they somehow survived, quietly went about their business when it was over. However, it was this advantage that became the heroines’ downfall in retellings of their heroics. As Anne Elliot in Persuasion says, “Men have had every advantage of us in telling their own story . . . the pen has been in their hands.” Ancient Greece was a male dominated society and literature was written for males by males in order to inspire males, hence the concept of male heroism was by far much more established. Women are only witches and harlots or submissive and modest because their stories are written by men who, despite their best intentions, did not understand and never experienced power as women. 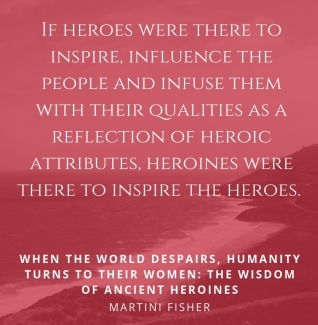 In Lycurgus against Leocrates, Euripides says

“if women bring themselves to act like this, men should show towards their country a devotion which cannot be surpassed, not forsake it and flee, as Leocrates did, nor disgrace it before the whole of Greece.”

In other words,if women were willing to sacrifice themselves for their people and countries, so should the men, otherwise they would be shamed as cowards. If heroes were there to inspire, influence the people and infuse them with their qualities as a reflection of heroic attributes, heroines were there to inspire the heroes. Through heroines in Euripides, Homer and Apollodorus, the authors are expressing the heroine’s lack of pride and ego which men are often governed by, and trying to bestow these self sacrificing qualities on their readers, the heroes and the society.