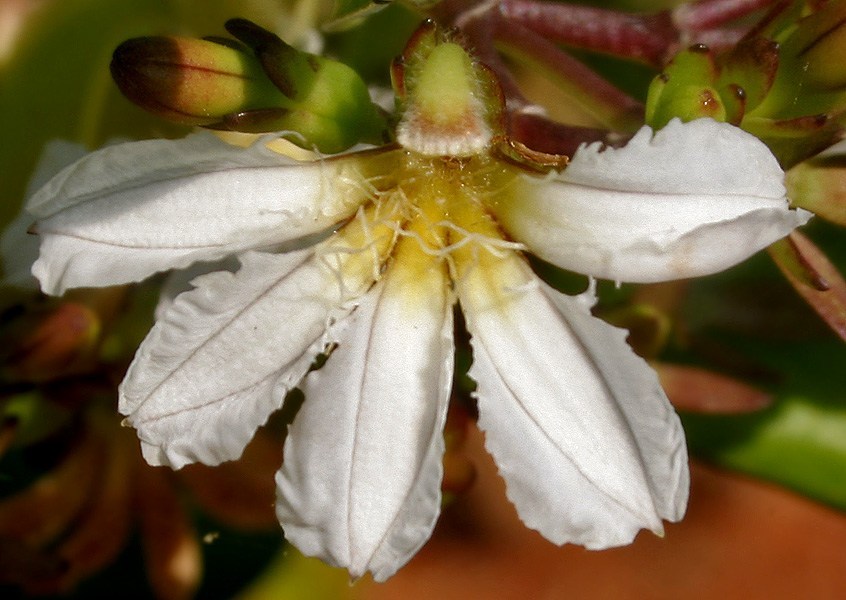 Naupaka: The Legend of the Torn Flower

The beautiful Naupaka flower is one of Hawaii’s most common plants found both along the beach and in the mountains. Its appearance is unique as it looks like a flower that has been torn in half.

There are different legends about this flower, and they all relate to the story of forbidden love. One of the more famous legends tells us about the princess Naupaka who lived in the mountains. One day while walking along the beach, she met encountered a handsome fisherman named Kaui. When their eyes met, they both smiled – it was love at first sight.

Realizing that she would never be allowed to marry a common fisherman, Princess Naupaka knew that she was prohibited from marrying him. She rushed to one of the Kupunas (elders) in the village. Hearing her story, the Kupuna shook her head sadly as the princess’ marriage is prohibited by Hawaiian custom. However, “all is not lost”, she said, “perhaps you can see the high priest and ask for his permission.”

Thus Naupaka and Kaui travelled for days to search for the high priest. Once they finally found him they told him about their love and asked his permission to marry. The priest was sympathetic, but even he could not turn his back on their custom. “That blessing” , he said “only comes from the gods.” He then suggested that the lovers pray earnestly to them until they have their answer.

So Naupaka and Kaui prayed. Soon, dark clouds came overhead and a heavy rain fell upon them. A lightning struck near them and Naupaka screamed in shock. She stopped her prayer and the rain soon stopped. Heartbroken, the princess realized that the thunder and lightning was a sign from the gods that she and Kaui were not allowed to be together. She tore the flower from her hair and ripped it in half. She then gave half to Kaui and the two lovers said their goodbyes. Kaui would return to the seas and Naupaka would spend the rest of her life in the mountains.

As Naupaka and Kaui went their separate ways, the flowers around them saw their sadness and mourned to see the heartbroken young lovers. To this day, the flowers near the sea and in the mountains only bloom in halves. The ones growing near the sea are called Naupaka Kahakai, while the ones growing in the mountain is called Naupaka Kauihiwa. Each flowers look like half of a blossom, but when they are placed together, they form a perfect flower. When the flower of the Naupaka Kauihiwi and the Naupaka Kahakai are joined together after they have been picked, the lovers can be reunited, even if it was only for a brief moment.

#where #whereswaldo #history #justforfun #justforlaughs #ancienthistory #ancientworld #egypt #egyptian #sphynx #art #statue #mythology #mythicalcreatures #likeforlikes #likeforlike
Psychologist Robert Provine’s theory is that, “Laughter is a mechanism everyone has. It is a part of universal human vocabulary. There are thousands of languages, hundreds of thousands of dialects, but everyone speaks laughter in pretty much the same way.” Babies have the ability to laugh before they ever speak. Children who are born blind and deaf still retain the ability to laugh. In other words, when you have very little else, you will still have the ability to laugh. This is my last 'episode' of Ancient Stories. Thank you for joining me these past month and I do hope that you enjoy this one. I'm taking my stories from ancient Aboriginal mythologies this time. You can head over to my website to read or to my youtube channel to hear - both links are in my bio ❤ #ancientworld #video #quote #laugh #ancientstories #ancienthistory #mythology #martinifisher #youtube #youtubechannel
Link in bio❤ #article #articlepreview #ancientorigins #authorsofinstagram #ancientgreek #maenad #ancientworld #ancienthistory #ancientreligion #history #mythology #greekmythology #mythographer #martinifisher
Bearded Dionysos at a feast, fragment. The head is adorned with a festive wreath with rosettes. Sharp mould of a fine-quality and well-fired clay. Early 4th century BC.
%d bloggers like this: