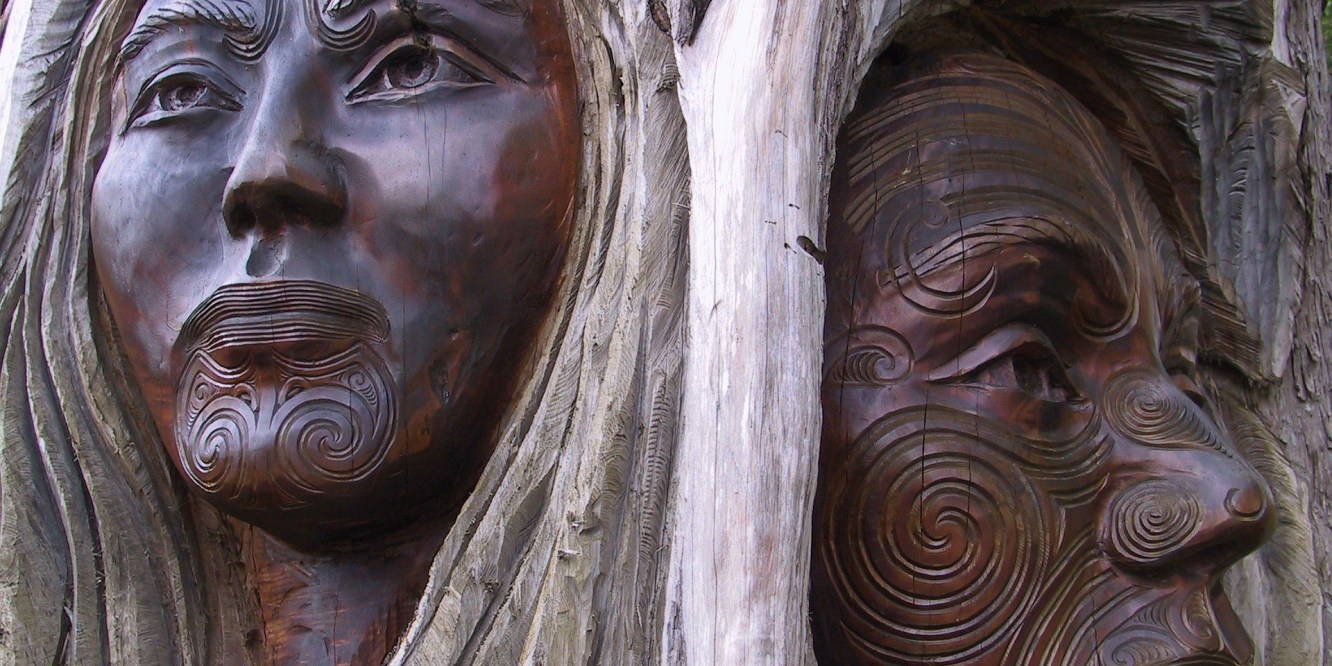 In Maori mythology, Ranginui and Papatūānuku are the sky father and the earth mother. They lie locked together in a tight embrace. Their many children, the gods, are therefore forced to live in the cramped darkness between them. These children always dreamed of living in the light. When they grew up, Tumatauenga, the god of war and fiercest of the children, proposes that the best solution to their predicament is to kill their parents.

And so, for the first time in their lives, the children of Ranginui and Papatūanuku see light. However, not everyone was happy about this separation. Tawhirimatea, the god of storms and winds, is angered that his parents have been torn apart and cannot bear to see his father’s tears as he was ripped apart and thrown up to the sky. Tawhirimatea flies off to join Ranginui. To fight his brothers, Tāwhirimātea gathers an army of his children—winds and clouds of different kinds, including fierce squalls, whirlwinds, gloomy thick clouds, fiery clouds, hurricane clouds and thunderstorm clouds, and rain, mists and fog. As these winds show their might the dust flies and the great forest trees of Tāne are smashed under the attack and fall to the ground, food for decay and for insects.

Then Tāwhirimātea attacks the oceans and huge waves rise, whirlpools form, and Tangaroa, the god of the sea, flees in panic. Punga, a son of Tangaroa, has two children, Ikatere – the father of fish, and Tu-te-wehiwehi – the father pf reptiles. Terrified by Tāwhirimātea’s onslaught, Ikatere seek shelter in the sea and Tu-te-wehiwehi found refuge in the forests. Tangaroa has been angry with Tāne eversince for giving refuge to Tu-te-wehiwehi and for helping the descendants of Tūmatauenga with tools to catch his grandchildren, the fish. So whenever Tāne supplies the descendants of Tūmatauenga with canoes, fishhooks and nets to catch the descendants of Tangaroa, Tangaroa retaliates by swamping the canoes and sweeping away houses, land and trees that are washed out to sea in floods, hoping that the reptiles, children of Tu-te-wehiwehi would finally come home.

Tūmatauenga never forgotten about Tane’s action in separating their parents and his brothers’ preference towards Tane’s methods. He made snares to catch the birds so that the children of Tāne who could no longer fly free. He then made nets from forest plants and casts them in the sea so that the children of Tangaroa would lie in heaps on the shore. He made hoes to dig the ground, capturing his brothers Rongo and Haumia-tiketike where they have hidden from Tāwhirimātea. Recognising them by their long hair that remains above the surface of the earth, he drags them up and heaps them into baskets to be eaten. Thus Tūmatauenga eats all of his brothers and their children to repay them for what he perceived as their cowardice.

All these actions left out one more child of Ranginui and Papatūānuku. This child was never born and still lives inside Papatūanuku. Whenever this child is kicking the earth shakes and causes an earthquake. His name is Ruaumoko, the god of earthquakes and volcanoes.

Perhaps contrary to Tūmatauenga’s belief, Tāne took no pleasure in separating his parents. Later, he searched for heavenly bodies as lights to beautifully adorn his father. He threw up the stars, the moon and the sun towards his father, hoping to make him a little happier. Ranginui and Papatūanuku continue to grieve for each other to this day. Ranginui’s tears sometimes fall towards Papatūanuku to show how much he loves her. Sometimes Papatūanuku heaves and strains and almost breaks herself apart to reach her beloved partner again but it is to no avail. When mist rises from the forests, these are Papatūānuku’s sighs as the warmth of her body yearns for Ranginui and continues to nurture mankind.