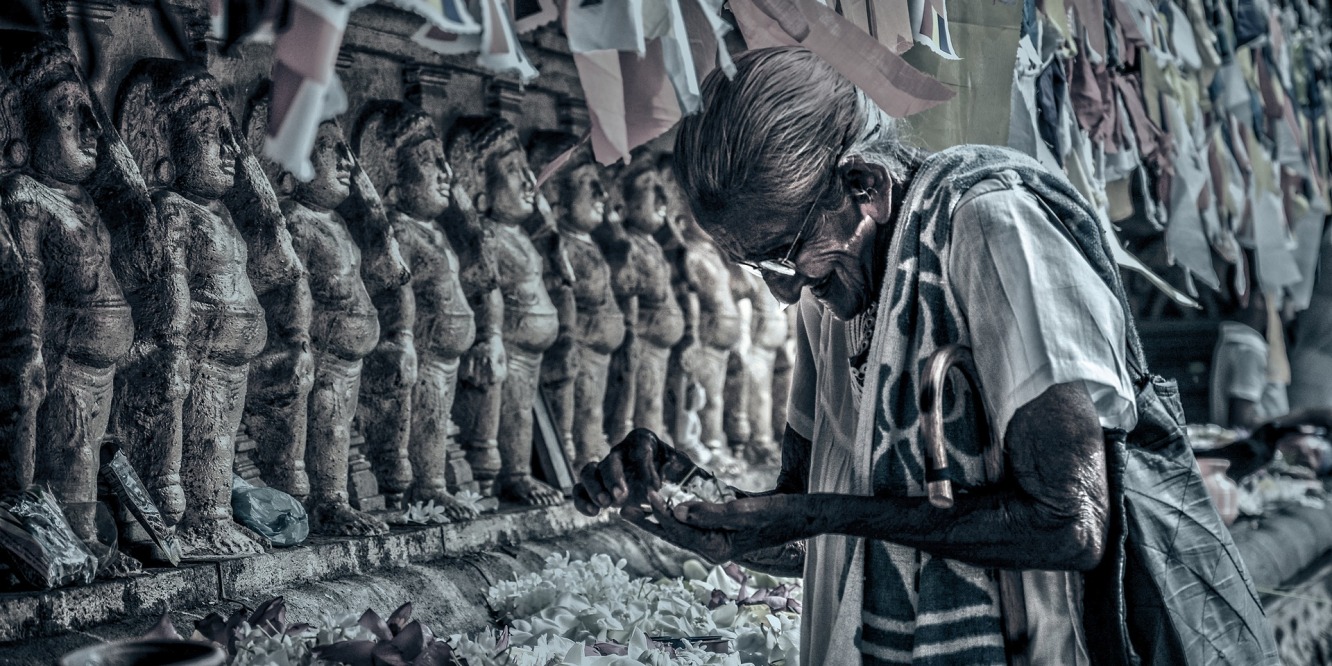 By that sweet ornament which truth doth give!

The rose looks fair, but fairer we it deem

For that sweet odour which doth in it live.

In this poem, Shakespeare was arguing his belief that there is a strong link between truth and beauty. This may not be the most famous sonnet he ever wrote, but it’s one of the best poetic meditations on the meaning of beauty.

Prince Nanda, also known as Sundarananda (handsome Nanda), was the younger half-brother of the Buddha. It was seven years after his Enlightenment that the Buddha, at the request of his father who missed him, returned to his home city. On the third day of his return, after his meal, the Buddha silently handed his bowl to Nanda. After that he stood and left. Thinking that the Buddha would take his bowl back, Nanda followed him until he reached the Park where the Buddha was staying.

When they arrived at the Park, the Buddha asked Nanda if he might become a monk. Although Nanda had just wedded the beautiful Janapada Kalyani, that same day Nanda took ordination and joined the community of Monks.

However, Nanda enjoyed no spiritual happiness. His thoughts were constantly directed towards his beautiful wife and his heart pined for her. Learning of this, the Buddha took Nanda on a journey to Tavatimsa Heaven. On the way Nanda saw a she-monkey that had lost her ears, nose and tail in a fire, clinging to a charred stump as if she couldn’t bear to let go no matter how ugly it was.

When they reached the heaven abode, Nanda saw beautiful celestial nymphs. They have long ago obtained their enlightenments and were blanketed by the glow of their happiness and compassion. The Buddha asked Nanda, “Which do you consider more beautiful? Those nymphs or Janapada Kalyani?” Nanda replied, “Venerable Sir, Janapada Kalyani looks like the scalded she-monkey, compared to those nymphs.” The Buddha then said, “Nanda, can you now see that what you thought to be exceedingly beautiful now pales in comparison to greater beauty?”

Beauty is not in the face; beauty is a light in the heart.

You might wonder what then happened to Nanda’s beautiful wife. Some time after her husband left to become a monk, the princess Janapada Kalyani, also known as Rupananda, pondered, “My elder brother who could have become a Universal Monarch has renounced the world to become a bhikkhu. Rahula, the son of my elder brother, and my own husband Prince Nanda have also become bhikkhus. My mother Gotami has also become a bhikkhuni, and I am all alone here!”

So she went to the monastery and became a bhikkhuni herself. But there was a problem, she had become a bhikkhuni not out of faith but only in imitation of others and because she felt lonely. It soon became obvious that Nanda was not fully focused on her life as a nun. Nanda’s thoughts were mainly directed centred on her own beauty and her popularity with the people.

She had heard from others that the Buddha often taught about impermanence and earthly dissatisfactions. So she thought that, if he should see her, he would talk deprecatingly about her good looks. Therefore,  with this thinking, she kept away from the Buddha. But other bhikkhunis coming back from the monastery kept talking in praise of the Buddha. So one day, Rupananda decided to accompany other bhikkhunis to the monastery.

The Buddha saw her and reflected, “A thorn can only be taken out with a thorn; Rupananda being very attached to her body and being very proud of her beauty.” The  Buddha called her explicitly, and when she presented herself in an ashamed and anxious demeanour, he appealed to all of her positive qualities to make her feel a bit more joyful and calmer to receive his teaching. Since Nanda was so preoccupied with her physical beauty, he caused an image of a very beautiful lady to be seated near him, fanning him. This young girl was visible only to Rupananda and the Buddha. When Rupananda saw the girl, she liked her very much but she realized that compared to that girl, she herself was like an ugly old crow compared to a beautiful white swan.

Then, she looked again and was surprised to find that the girl had grown older. Again and again, she looked at the figure beside the Buddha and every time she noticed that the girl had grown older and older. Thus, the girl turned into a grown-up lady, then into a middle-aged lady, an old lady, a decrepit and a very old lady successively. Rupananda came to realize that there was a continuous process of change and decay in the body. With the coming of this realization, her attachment to the body diminished. Finally, the figure near the Buddha died – her body became  bloated, pus and maggots came out of every openings on her body until crows and vultures tried to snatch her.

Having seen all these, Rupananda pondered, “This young girl has grown old and decrepit and died in this very place under my own eyes. In the same way, my body will also grow old and wear out; it will be subject to disease and I will also die.” Thus, Rupananda gained a deeper understanding of the nature of her beauty.  Then the Buddha spoke to her:

This body is built with bones which are covered with flesh and blood; within this dwell decay and death, pride and detraction

Later, when he saw her again, the Buddha recognised Rupananda as being the foremost amongst bhikkunis. Rupananda had spent time meditating on the impermanence of her body and soon found her inner peace.

The Dhammapada is a Buddhist text that is believed to record the actual words of the Buddha who lived between 563 and 483 BCE. His words were passed along orally until they were written down in about the first century BCE.