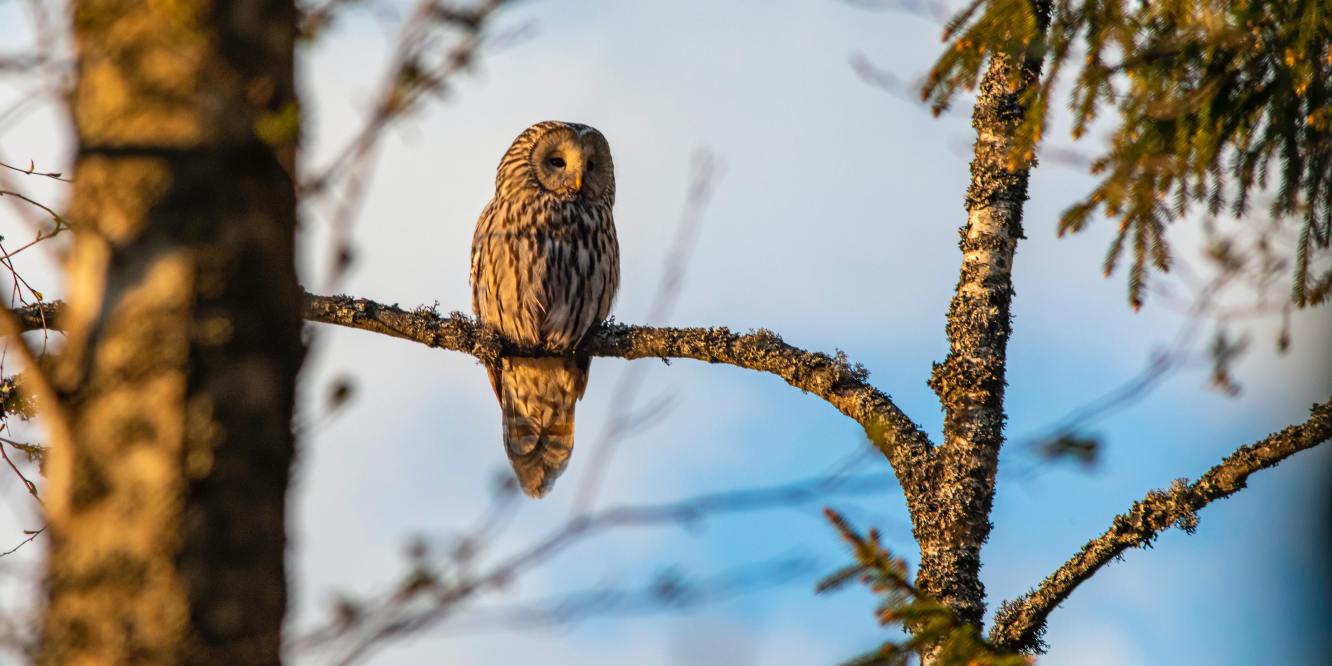 About 48 million years ago, an owl swooped down to catch its prey in broad daylight – we know this because in 2018 Dickinson Museum Researchers found the exquisitely preserved remains of the owl. Its skull shares a telltale characteristic with modern-day hawks which also hunt by day. As they have evidently existed since the ancient times, the owl has been regarded with fascination, awe and fear throughout history. They feature prominently in the myths and legends of a variety of cultures.

An owl’s appearance at night, when people are helpless and blind, linked them with the unknown. Pliny (23-79 AD) described the owl as: “the very monster of the night” and argued that: “when it appears, it foretells nothing but evil.” However, despite his apparent distaste for owls, Pliny also believed that the viscera of owls held curative properties that could restore health and relieve pain. For example, a healthy mixture of owl brain and oil dropped directly into the ear canal was a handy cure for an earache.

Hooting of the owls was regarded an ill omen. In Ancient Egypt, if a lowly official received the glyph of an owl from the pharaoh, it was understood that the recipient had to take his own life. In the Teotihuacan culture, the owl was also seen as an evil omen as well as one of the many sacred animals of the rain god Tlaloc. By the Middle Ages in Europe, the owl had become the associate of witches and the inhabitant of dark and profane places.

The Sumerians called the owl the ukuku. An example is from the Cursing of Agade, an ancient Mesopotamian story written around 2100 BC: “May the ukuku, the bird of depression, make its nest in your gateways, established for the Land,” and: “The bird of destroyed cities… The sleep-bird, bird of heart’s sorrow.” In ancient Syria, the owl is found recorded in the eighth-century treaty in the Aramaic inscription from Seﬁre, in which the owl serves as an emblem of desolation.

Owls appeared in graves from the earliest layers of the Carthaginian settlement, contemporary with the Tyre al-Bass cremation burials. Two claws from a species of owl native to Lebanon were identified. A close examination of their remains revealed that, before being placed in the fire, these owls had been cooked or boiled. The excavator surmises that the remains of a meal or offering had been placed on the funeral pyre together with the corpse of the deceased and subsequently mixed with the human remains in the burial urn. The Phoenicians/Sidonians Hebrews sacrificed owls to be included in their burials back to the seventh century BC.

In biblical law, owls are included in the list of birds that were not to be eaten. An oracle concerning Edom, Isaiah 34:11 declares that: “The desert owl and screech owl will possess it; the great owl and the raven will nest there. God will stretch out over Edom the measuring line of chaos and the plumb line of desolation.” The eagle owl roosts on the capitals of a desolated Nineveh in the prophetic vision of Zephaniah 2:14 which says: “Flocks and herds will lie down there, creatures of every kind. The desert owl and the screech owl will roost on her columns. Their hooting will echo through the windows, rubble will fill the doorways, the beams of cedar will be exposed.” Later the owl deity known as Ashtarte becomes the demon goddess that is known as Lilith, who was created in the first Genesis account.

The sinister owl symbolism migrated to Italy and the Romans with the Phoenician tribe of mariners from Crete who were said to survive the deluge and gave rise to the Roman empire. It was a common belief that the Roman Army was warned of impending disaster by an owl before its defeat by the Parthian Empire at the Battle of Carrhae in 53 BC. Virgil (70-19 BC) describes an owl’s death-howl from the top of the temple by night as a precursor of Dido’s death.

Emperors Augustus, Valentinian and Commodus Antonius, were thought to have died after an owl alighted on the roof of their villas. Ovid (circa 43 BC – 18 AD), a very popular poet in his time, somewhat amplified this sinister aspect by saying that the owl’s presence was an evil omen and owls destroy children who are not properly watched. In the Fifth Book of his Metamorphoses, Ovid relates how Proserpine (Persephone) was transported to the underworld against her will by Pluto (Hades), god of the underworld, and was to be allowed to return to her mother Ceres (Demeter), goddess of agriculture, providing that she ate nothing while in the underworld. Ascalpus, an underworld demon, saw her picking a pomegranate, and told Pluto (Hades) what he had seen. Ceres (Demeter) turned him into an owl for his trouble. Ill-omened in his form, Ascalpus became forever known as: “a sluggish Screech Owl, a loathsome bird”. To avert all evil that the owl supposedly had earlier caused by its screeching, early Romans would nail a dead owl to the door of their house. This custom persisted into the 19th century.

The song of the owl does not exclusively foretell doom. Peter Tate, in Flights of Fancy: Birds in Myth, Legend and Superstition, says that a belief originating in India proposes various fates according to the number of owl calls one hears. For example, an owl screeched once to foretell death, two screeches means the success of some project, three screeches mean a marriage, four screeches mean trouble, five screeches mean a journey, six screeches relate to the arrival of visitors, seven screeches foretell the feeling of anxiety, eight screeches warn of a sudden death, and nine screeches mean a favorable event.

Hindu scriptures describe calls of owls as having the character of songs in which it consisted of a simple combination of notes repeated at various intervals. In the Veda, Uluka was noted for its cry and was deemed the harbinger of ill fortune. However, there is a story that narrates how the sage Narada, famous in Hindu traditions as a traveling musician and storyteller who carries news and enlightening wisdom, was advised to learn music from an owl which lived near the Manasarovar lake in the Himalayas.

Jeevaka Chintamani, one of the Five Tamil Epics, says that the owl emitted sweet music like a lyre. Verse 83 of Natrinai, a classical Tamil poetic work, is an apostrophe to the owl that lives in the deep recess of a tree on the bank of the village tank. At night, the owl’s screech is said to be alarming and the lady-companion promises it a fine dish of meat boiled in ghee if it kept silent at nights when the hero comes on visit.

The silence of an owl was said to have saved the life of another hero, Genghis Khan. When his horse was shot in one of his battles, Genghis Khan ran for his life and hid under a bush as his enemies were looking for him. An owl sat calmly on the tree under which he was hiding. Thinking that the owl would have fled if there was anyone hiding nearby, the enemies did not come near that tree. Thus, the arms of the Tartar rulers contain a black night owl in a golden shield.

The Montagnais people of Quebec believed that the saw-whet owl was once the largest owl in the world and was very proud of its voice. After the owl attempted to imitate the roar of a waterfall, the Great Spirit humiliated the owl by turning it into a tiny owl with a song that sounds like dripping water.

Hindu goddesses Lakshmi (goddess of fortune and prosperity) and Chamunda (goddess of war and disasters) both have owls as their vahanas (mounts). Perhaps due to their association with the otherworld and its mysteries, the owl was also thought to be a predictor of future events and became an emblem of wealth, prosperity, wisdom and fortune. Lakshmi, the Hindu goddess of fortune, wealth and prosperity is known to have a white barn owl as her vahana. Therefore, one never drives away an owl in Bengali households as it symbolizes good fortune and wealth. The white barn owl especially is considered as a brahmin (an upper caste in Hinduism specializing as priests, teachers and protectors of sacred learning). Lakhsmi’s owl is known as Uluka. Uluka is also another name for Lord Indra, the king of the heavens, personifying wealth, power and glory.

Uluka may be the best illustration for the dueling qualities and fluctuating characteristics of the owl in the ancient world. As to achieve prosperity one must achieve wisdom, the goddess Lakshmi seeks one to open the eyes to the light of wisdom. As the owl is a bird that sleeps during the day, it is considered to be a symbol of avidya (the darkness of ignorance). The daytime partial blindness of the owl symbolizes a sadhaka’s assumed blindness and tendency to seek secular instead of spiritual wealth. A sadhaka is someone who follows a particular way of life designed to realize the goal of one’s ultimate ideal. Lakshmi’s owl becomes Lakshmi’s vahana when she blesses with wealth and prosperity. It then becomes a symbol of universal wisdom that warns against arrogance and the undisciplined mind. When Lakshmi’s wealth is used by humans for activities which are not virtuous, then one is said to be blinded like a sleeping owl. Then the Uluka is but a bird of ill omen and the vahana of Alakshmi (“not Lakshmi”) who: “has a dry shriveled up body, sunken cheeks, thick lips, and beady eyes”. Deities send Alakshmi to dwell amongst pernicious people to bestow poverty and grief upon them.

As the symbol of Athena, the owl accompanied Greek armies to war. An owl flying over Greek soldiers before a battle was a sign of victory. The owl also kept a watchful eye on Athenian trade and commerce from the reverse side of their coins.

The owl’s contradictory nature also fits in comfortably in its role as Athena’s companion as Athena was the goddess of both wisdom and warfare, combining within herself the two contradictory qualities represented by the owl. Athena was the daughter of Zeus and his first wife, Metis (‘wisdom’). When Metis warned Zeus that their firstborn would be more powerful than Zeus himself, Zeus swallowed Metis and their unborn child whole. This gave him a headache which he cured by splitting his head open with an axe. Athena came forth from the wound, fully grown.

One of Athena’s precursors was the Eye Goddess of Neolithic people. The wide staring eyes of the Eye Goddess were all-seeing and all-knowing. Along with being the goddess of wisdom and warfare, in ancient Greece Athena was also known as an eye goddess and was described as the ‘flashing eyed’. Thus the large almond-shaped frontal eye on early owl coins may have religious significance.

Athenian Owls, thick, heavy, high-relief silver coins minted more than 2,000 years ago, were arguably the most influential of all coins, and the Classical Owl tetradrachm is the most widely recognized ancient coin among the general public today. The use of owls in coins popularized the practice of putting a head on the obverse of a coin and a tail (animal) on the reverse. These coins were handled by Pythagoras, Hippocrates, Socrates, Plato, Aristotle, Archimedes, and others whose thinking formed the very foundation of Western civilization. Thematically, the coins remained unchanged (Athena on the obverse, her owl on the reverse) for half a millennium, through great changes in the ancient world.

All Archaic, Classical, and Intermediate Style Owls depict on the reverse an olive sprig. This refers to Athens’ large export of olive oil, which along with silver, pottery, and military success were the main reasons for her prosperity.