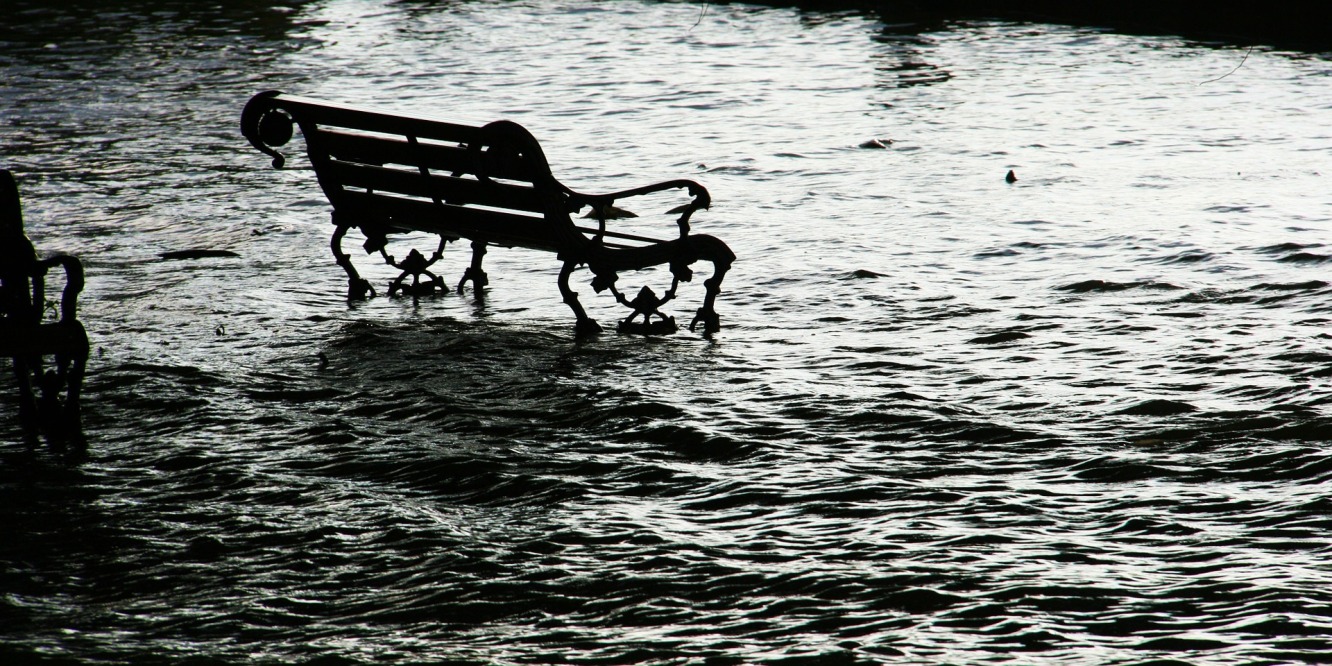 On the early hours of 1 January 2020, flash floods took place throughout the Indonesian capital of Jakarta and the metropolitan area. Water levels reached 30-200 cm in many parts of the city, even standing at four meters in some areas. More than 397,000 people were evacuated to higher grounds. Due to landslides, hypothermia, drowning and electrocution, officials reported the death toll at 60 on 4 January 2020.

A significant contributing factor is that a significant part of Jakarta is low-lying, some 24,000 ha (240 km2) of Jakarta’s main part are below sea level. If heavy rain combines with high tides, flooding can become serious. The high tides push water into low-lying areas when this occurs, coinciding with the rain runoff in upland areas flowing down into the Jakarta region.

One of the most famous and recurrent calamities in the ancient world was flooding. People therefore saw the wrath of gods in them and begged for safety.

Hope and Fear: The Annual Flood of Ancient Egypt

The hieroglyph for the Egyptian word renpet (“year”) is a woman wearing a palm shoot over her head, symbolizing time. She was often called the Future Mistress. Fertility, youth and spring were also personified by her. The New Year, Wepet Renpet (“the year’s opening”), was based on the Nile River’s annual flood, an earthly cycle that coincided with a celestial cycle as well. The New Year was also characterized by communal feasts and a combination of hope and fear. As they didn’t know how the flood would affect them, every year was probably the last year for the ancient Egyptians.

The annual flood left behind rich silt deposits, fertilizing crops to feed the country as a whole. Just the right amount of flooding guaranteed a fruitful harvest – too little means starvation, too much means destruction.

The annual flood festival celebrated Osiris’ death and rebirth and, by extension, the land and people’s rejuvenation and rebirth. The myth behind this celebration was that by drowning him in the water, the god Set and his accomplices assassinated Osiris and dismembered him–scattering his limbs up and down the valley. The death of Osiris culminated in the annual floods giving life to the valley. Osiris was then thought to have arisen from the dead, but he required his devoted followers ‘ persistent supplication to validate his return. The priests mourned his passing, prayed for his return and celebrated with music, singing and festivities at the moment of his resurrection.

Traditionally, as Osiris had drowned, young boys selected for their exceptional beauty were thrown into the Nile to drown as a sacrifice for the benefit of the living. Those who drowned in the Nile were then regarded as gods, especially if the water responded with a flood the following year.

As well as singing and dancing to mark his rebirth, solemn ceremonies relating to Osiris ‘ death were observed. At the beginning, the call-and-answer poem known as Isis and Nephthys ‘ Lamentations was recited to call Osiris to his feast.

The lamentation is when Osiris ‘ soul is called by the two goddess-sisters to join the living. The two sisters ‘ simultaneous entreaties repeated one another in their attempts to revive Osiris symbolically. The best-preserved edition of this work comes from the Ptolemaic Dynasty (323–30 BCE) Berlin Papyrus, although the work itself is much older.

Another ancient view in Egypt is that the New Year’s Day itself was also considered the god Ra-Horakhety’s birthday. The idea was that the sun was resurrected on New Year’s day and became more and more fragile over the last few months of the year. This is another reason why it was considered dangerous at the end of the year. At the end of the year, the sun god was weak and vulnerable to attack from his enemies. If he were to be defeated, the New Year might never arrive.

Therefore, it was a time of great relief when the sun rose on New Year’s day, because the end of the world had been averted. People would then make offerings to Ra-Horakhety at sunrise, pour black ink into the Nile for the goddess Nut and the god Nun as a sign of gratitude, then cleansed themselves by bathing in the Nile. Afterwards, they wore their best clothes and went off to riotous banquets to celebrate their opportunity to see another year.

The Beginning and the End of Times in Hinduism

There were very common floods in ancient India. Plava (floods) and pralaya (deluges) in Hinduism signify the beginning and end of times as well as the changes that occur as a result of the Time cycle, which is another term for the Death god. Since the human settlements developed primarily along the Indian subcontinent’s main rivers, people were acquainted with the problems caused by floods that they attributed to gods’ anger and their own karma. Flood heralds change in the world’s lives and individuals and growth. Therefore, drastic changes in the world’s order and regularity and revolutions are compared to extreme (viplavam) floods.

Nearly every mahayuga (epoch) begins or ends, according to the Puranas, with a great deluge during which gods try to help people and preserve the eternal knowledge for posterity. These can either be induced by God or Nature to cleanse the earth and inaugurate a new era, or to tackle the problem of evil and save people from its power. The city of Dwaraka was sunk in the ocean at the end of Dwapara Yuga, which was then ruled by Lord Krishna as his capital. It also marked the end of his life and the start of a new age.

As a consequence, floods in Hinduism reflect the death and destructive power of God, Nature, a demon, or even an evil asura or rakshasa who wishes to create chaos. We also represent God’s role in persevering in order to maintain their order and regularity among worlds and beings. A flood may also signify the overabundance of anything that can cause the essence and order of things to be imbalanced and require divine intervention. Because of past karma or divine providence, a person may be filled with problems or good things in life.

A flood myth or deluge myth is a narrative in which, in an act of divine retribution, a great flood, usually sent by a deity or deities, destroys civilization. Parallels are often drawn between the flood waters of these myths and the primaeval waters contained in certain myths of creation, as the flood waters are portrayed in preparation for rebirth as a measure for the redemption of mankind. Many flood myths also include a hero of religion, who “represents the human desire for life.”

The flood story is present among many cultures as seen in the tales of the Mesopotamian floods, Deucalion and Pyrrha in Greek mythology, the tale of the Genesis flood, Pralaya in Hinduism, the GunYu in Chinese mythology, Belgemir in Northern mythology, the arrival of the first settlers of Ireland with Cessar in Irish mythology, the legend of the people of K’iche and Maya in Mesoamerica, the Lake Cour in Mesoamerica.

Of course, the best-known story of the Great Flood is from the Biblical Book of Genesis 6-9 in which God is incensed with the wickedness of mankind and kills them with a flood, except for the righteous Noah and his son. The biblical work is based on the earlier oral version of the Mesopotamian flood story repeated in the above-mentioned works and which may have also inspired an Egyptian text known as The Book of the Heavenly Cow, part of which dates back to the First Intermediate Period of Egypt (2181-2040 BCE).

The Heavenly Cow’s Book tells how they rebelled against him after the sun god Ra had created humans, and he decided to destroy them. He sent the goddess Hathor to destroy mankind as an extension of himself (known as The Eye of Ra), but he repented of the action after she killed many. He then had massive amounts of red-colored beer to look like blood and ordered it to be placed in the path of Hathor. She drank the bottle, fell asleep, and later woke up as she is generally portrayed as the loving goddess and friend of humanity.

Atrahasis is not the earliest version of the Mesopotamian flood story and the earlier oral version almost definitely inspired the versions of other cultures, including the Egyptian and Hebrew stories. In the Egyptian version, the revolt of humanity and the grace of Ra leads to a closer relationship with the gods, and the same is implied in the biblical story by the covenant of God with Noah after the waters of the floods have sunk. In the Atrahasis, the gods allow human life to proceed with the stipulation that they will not live forever or multiply as bountifully as before.

The story would have been used to explain human mortality, the misfortunes associated with childbirth, even one’s child’s death. Because overpopulation and the ensuing noise had once brought down the awful deluge that almost killed mankind, it might be easier to bear the loss of one’s child with the understanding that such a loss helped preserve the natural order of things and preserved harmony with the gods. The myth would have served the same basic purpose that such stories always have: the assurance that there is some greater purpose or meaning in individual human suffering and is not just random, senseless pain.

The Atrahasis, like Noah’s Ark’s narrative, is eventually a tale of hope and faith in a deeper sense to the human experience tragedies.

It often happens that nature and weather elements equate feelings and emotions. Here are some examples: I am frozen in my seat. I was flooded with passion etc. Water in our dreams also symbolizes the unconscious, according to Carl Jung. Severe storms, winds and rain often accompany flooding. Also compared to difficult emotions such as frustration, rage, sorrow, disappointment, pain and fear.

Water flooding seems to mimic symptoms of emotional overload. Just like water, when we reject them emotions would find a point where they surface, start flowing out of us and can’t be stopped. They take over our minds and  keep us trapped there until the pouring is over. They then continue to recede naturally, leaving everything soaked or destroyed, allowing reconstruction to finally take place. There then follows a wave of sorrow from our souls. But then, there are also always a flood of people emerging for us in unity, compassion and hope.

Can we then do anything to stop the roaring storm, the rain, or the massive water damage? Probably not. But we can use flooding to reflect, become more conscious and more thankful for the moments when our lives’ waters are calm.