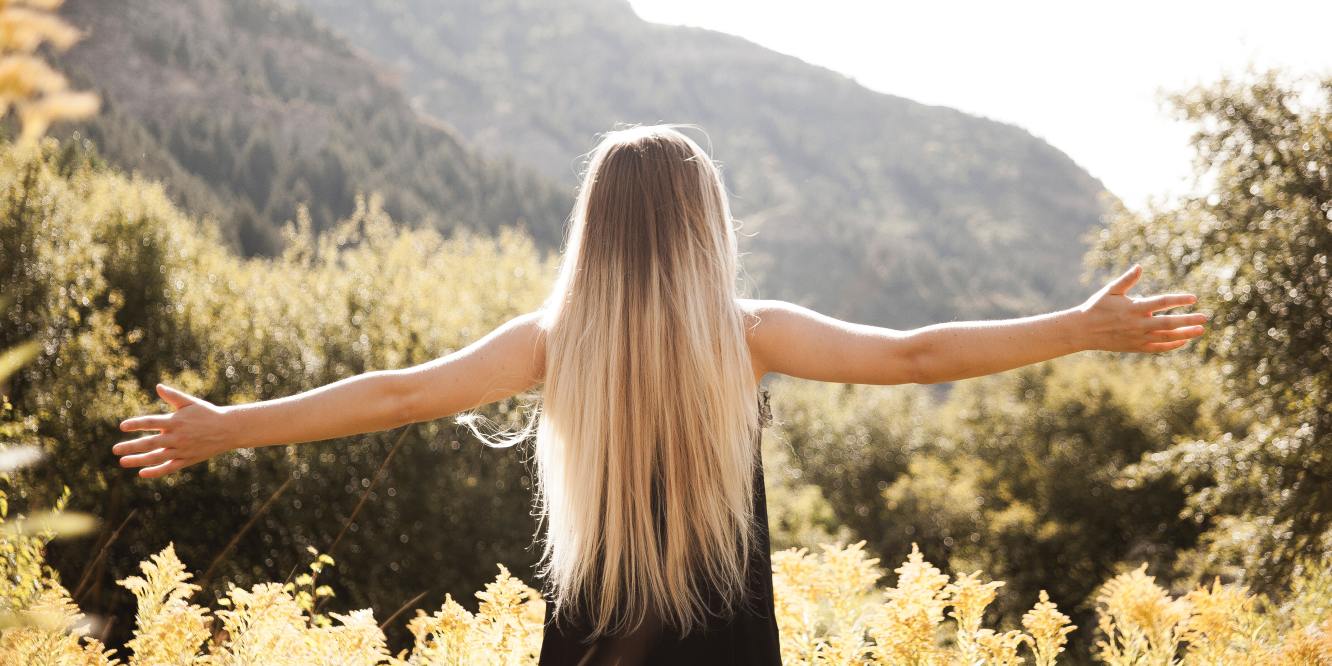 While we reject the idea that brunettes are mousy or that gentlemen prefer blondes, we do have to concede that going platinum made Marilyn Monroe’s career as she lightened her brown hair early in her modeling days and never looked back. In fact, Hollywood saw the emergence of many blonde actresses from 1930’s to the 1950’s. Epitheths such as “screen siren” or “cinematic goddess” were attached to the most popular blonde actresses of the day, including Monroe herself. Her face always seemed lit from within. Her secret: facial hair. Seriously. It was actually a thin layer of downy peach fuzz on her cheeks that caught the studio lights just so and gave her the effect of a “glow”. By the magic of cinematic lighting, pale skin and blonde hair were made to look like the closest approximation of what the viewers’ imagine goddesses would look like.

Our clumsy association of blonde hair with divinity goes back a long way. Two of the Norse goddesses, Sif and Freyja are described to be blondes. Sif was known for her golden hair, which symbolises fertility and prosperity in agriculture, and was described as the most beautiful of women. Blonde hair-blue eyed Freyja, the goddess of love, beauty and fertility, was also said to be the fairest of all goddesses. The Greek goddess of love Aphrodite was often described as golden-haired and portrayed with this color hair in art.

One of the most famous and most visited sculptures of the ancient world was the Aphrodite of Knidos, sculpted by Praxiteles in 360 BC, which is also depicted with blonde hair. This statue inspired a myriad of copies of that decorated the temples, gardens, and villas of the Greek city-states. Pliny the Elder wrote that people traveled great distances to marvel at this sculpture. One man was so overcome with desire for the blonde Aphrodite, that late one night he sneaked into the temple to be alone with the statue. The man “embraced it intimately; and a stain bears witness to his lust.” Praxiteles is said to have modeled Aphrodite after his mistress Phryne who, with her long, flowing blonde hair, was said to be the most beautiful woman in Greece

The Ancient Greek & Roman Aristocrats admired poets like Homer who wrote about demigods and aristocratic privileges. Ancient greek poets often describe their deities as blond-haired. In Iliad, Homer writes “Even as when the lord of fair-haired Hera lighteneth, what time he maketh ready”.  The “fair-haired” description also includes the demi-gods. Euripides says that Hercales “cleared the grove of Zeus of a lion, and put its skin upon his back, hiding his yellow hair in its fearful tawny gaping jaws” and, in Odyssey, Homer writes “Our people who saw it, when they carried fair-haired Rhadamanthus to visit Tityus”. Rhadamanthus is the son of Zeus from his affair with Europa.

The Ancient Greek’s longing for blondeness is revealed in the romance Aethiopica by Heliodorus of Emesa, a tale about a royal Ethiopian couple who gave birth to a blonde girl, Charicleia, because they conceived under a painting of the nude blonde goddess Andromeda. Perhaps due to their connection to Aphrodite, ancient Greek prostitutes frequently dyed their hair blond using saffron dyes or colored powders. As a result of this and the natural rarity of blond hair in the Mediterranean region, by the fourth century BC, blond hair was associated with prostitutes. The comic playwright Menander (c. 342 – c. 290 BC) protests that “no chaste woman ought to make her hair yellow.” He further says that blond hair dye is dangerous for a woman’s moral character when he writes “what can we women do wise or brilliant, who sit with hair dyed yellow, outraging the character of gentlewomen, causing the overthrow of houses, the ruin of nuptials, and accusations on the part of children?”

The ancient Romans also portrayed their goddess of love, Venus, with light skin and blonde hair, which led to blond hair being considered to be a symbol of a prostitute. However, Roman prostitutes were carefully organized. They were licensed, taxed, and actually required by law to bleach their hair or wear blonde hair wigs to distinguish them from other women. In this setting, blond hair became much less a symbol of nobility and more a symbol of sexual abandon. Messalina, the third wife of the Emperor Claudius, was so excited by the idea of disguised, violent sex with strangers that she would sneak out at night wearing a blond wig and prowl the city. Other Roman ladies of fashion were soon imitating her choice of wearing blonde hair in public and the lawmakers were powerless to stop the trend. Added to this was the wave of blond envy among the aristocratic ladies of Rome, prompted by the admiration Roman men showed for the fair-haired women from the north. The Romans had long known of the fair-haired Celts, and military conquests in Gaul and Britain brought them in contact with even more Celtic and Germanic tribes. The element of rebellion and abandon by now associated with blond hair was to survive down the centuries, repeatedly re-surfacing in contrast to the image of fair-haired virginal purity.

Ovid (c. 43 BC – 17 AD) wrote about the blonde fashion of his time, with Roman women wearing blonde wigs made from the hair of captured or slain northern European women. Wealthier people could afford to sprinkle gold dust on their hair to create a blond look. Other, more affordable, bleaching agents included as sapo (goat’s fat mixed with beechwood ashes), Batavian pomade (a dyeing soap), lees (sediment of wine or vinegar), and pigeon dung. Women, and some men, applied bleaching agents to their hair and then exposed it to the sun to achieve a golden or red color. Another way to achieve a lighter shade was to cover the hair with flower pollen and the crushed petals of yellow-colored flowers. When harsh bleaching agents caused hair loss, Roman women resorted to wigs made from the hair of blond slaves.

Prior to this blond craze, Romans were much more likely to use dark colored dyes to hide gray hair or restore their natural color. More than 100 different recipes that the Romans used for bleaching or dying hair has been found. To color gray hair, the Romans used a mixture made from ashes, boiled walnut shells, and earthworms. Another recipe for dark hair dye combined boiled walnut shells, charred eggs, leeks, leeches, and other ingredients. Lead-coated combs dipped in vinegar would also leave a dark residue on the hair. Repeated use of a comb left more lead salts on the hair and deepen this color over time. Romans also imported black hair from India. However, while their use of blonde hair had the political significance of being a symbol of Rome’s subjugation of barbarians, the Indian hair was acquired through trade with no apparent political symbol attached to to them. Both Ovid and the epigrammatist Martial (c. 41 AD – 104 AD) refer to captivos crines (“captured hair”), making an explicit link between the commodification of hair and Roman power.

This passion for blondes offended the pride and patriotism of some Roman men, some of whom has likely shown admiration for blonde haired women themselves. Ovid himself castigated Roman women for “using rinses” and “dangerous concoctions” to dye their hair blond and suggested safer ways to seek beauty, “After our German conquests a wig is easily come by—a captive Mädchen’s tresses will see you through,.. eliciting admiration galore”. However, Ovid also warns, “the praise (like the hair) has been bought. Once you really deserved it. Now each compliment belongs to some Rhine maiden, not to you”. Of a Roman lady, Martial wrote that “Her toilet table contained a hundred lies, and while she was in Rome her hair was blushing by the Rhine.” Tertullian (160 – 220 AD), a Carthaginian Christian theologian, complained that Roman women are “ashamed of their country, sorry that they were not born in Germany or in Gaul. Thus, as far as their hair is concerned, they give up their country.”

Women continued to dye their hair blonde through the Middle Ages despite entreaties to the contrary by clerics who pointed to the blonde tresses of the temptress Eve as an example – Mistakenly, perhaps, as it only served in making blonde hair even more attractive especially for women who wanted to rebel against being told how to do her own hair. In this period, blonde hair came to represent dangerous eroticism, sexual temptation and beauty. However, its representation of sexual purity, moral goodness, and spirituality also survived. Angels were usually depicted as blonds in Christian arts, as were the chaste heroines of chivalric romance. The twelfth century French court poet Chrétien de Troyes filled his Arthurian legends with beautiful blonde women such as Guinevere who had flowing hair and blue or green eyes to attract the heroes. The blonde Iseult from the twelfth-century tale Tristan and Iseult was described as “the most beautiful woman from here to the Spanish Marches.” In Roman de la Rose, a thirteenth-century French poem, the hero encounters a bewitching beauty with grey-blue eyes, a straight nose, snowy breasts, and blonde hair—features that represented the pinnacle of female beauty in the Middle Ages and harks back to the Goddess Athena’s description of being “grey-eyed” and “fair-haired”.